This week I went on a super fun trip with kids ages 12 and up. I’m part of a group where we take turns planning trips with/for the older kids and our latest trip was to a serpentarium in Wilmington, NC. Zack (@zelda) did a great job planning it. We stayed at his grandparents’ condo for two nights and went to the Cape Fear Serpentarium, the beach, the Fort Fisher Aquarium, Fort Fisher, and a couple of little shops near the condo.

A serpentarium is like a museum/zoo that shows snakes, lizards, and other reptiles. We went to the Cape Fear Serpentarium which, according to the website, has the largest and most rare venomous snake collection in the country.

It was so amazing! I saw so many different types of snakes, including a black mamba (pictured) that either liked me or wanted to eat me. It was really cool to see a black mamba because when I was younger I was super interested in them and re watched a documentary about them probably five times. I felt proud of myself for knowing what kind of snake it was before looking at the sign. Black mambas are extremely venomous (5/5 on the venom scale) and their bites are known as the kiss of death.

There were also lizards and turtles, as well as alligators and crocodiles. I was really impressed with the variety and sheer number and size of the collection. We learned that all of the animals are taken care of by one person. That’s a huge job! Jess got their contact information and I’m hoping we might be able to help them out some time. Here are some more pictures:

We also went to the Fort Fisher Aquarium. That was a lot of fun. We saw a dive show where two scuba divers went into a huge tank with fish, sharks, turtles, and an eel and answered questions through an underwater walkie talkie system that we could hear outside the tank. We learned that green moray eels (pictured below) aren’t actually green. They’re blue, but the slime they secrete everywhere is yellow  making them appear green! I thought that was super cool.

Something the Fort Fisher Aquarium is famous for is Luna; their albino alligator. Albino alligators can’t survive in the wild. A big reason is that because they’re albino, they can get sunburns super easily. An alligator’s instinct is to bask in the sun. If an albino alligator basked in the sun and did what they wanted for just a couple of weeks, they would probably die from sun poisoning. 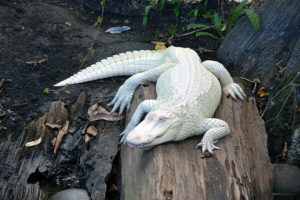 Unfortunately, we had to go through Fort Fisher really fast. We didn’t have time to read the signs and I don’t really remember anything from the quick movie we watched beforehand. I will say that it was a nice walk around outside and the mounds around the fort were cool, though.

I hope you enjoyed reading about my trip. The reason this is so late is because I’m on spring break (Universal Studios!!) and just now had a free few minutes to finish this up. 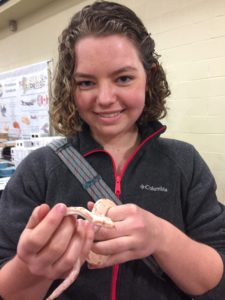 *Not at the Serpentarium, This is at Repticon the Sunday after the trip.