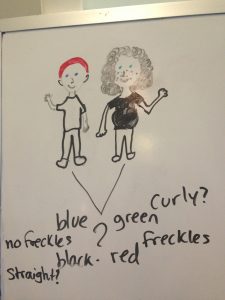 Sharon has the following traits:

These are Mike’s Traits:

First, let’s look at the punnet square for hair texture. 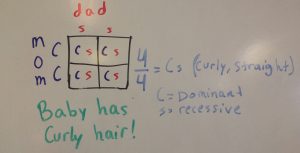 This baby would have curly hair. This is because curly hair is dominant, and in every situation the baby has one curly hair allele, meaning curly hair is pretty much a definite. This baby’s alleles are heterozygous Cs.

Let’s move on to freckles. 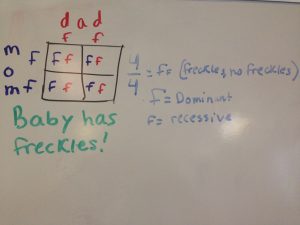 Next is hair color. 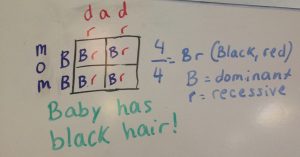 You probably know the drill by now: Black hair is dominant, red hair is recessive, there are no situations where the baby has two recessive traits, therefore baby has black hair. This baby’s alleles are heterozygous Br. 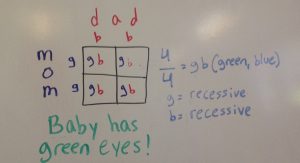 Now, last but not least, boy or girl? A baby’s sex is determined pretty much the same way other traits are determined. But instead of parents giving the child alleles, they each give the child a chromosome (specifically a sex determining chromosome). 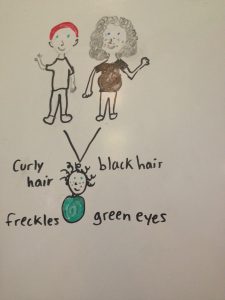 The baby has curly black hair, freckles, and green eyes. 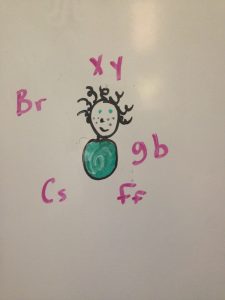 Now, what happens when the baby grows up and has a child?

His traits are pink and his wife’s are green.

And this, my friends, is how traits are passed down through generations. 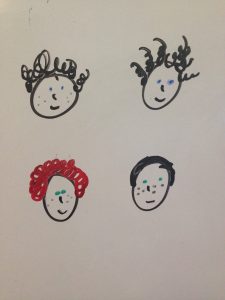 Please ignore the fact that these babies have no bodies.

If you have any questions, feel free to comment and ask! 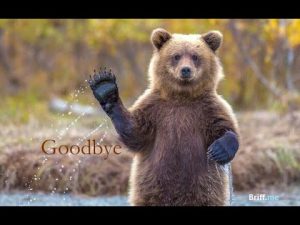 A couple days ago, Elisha, my sister ( @animalfreak9 ), commented on one of my blog posts. She asked what the chances of her inheriting hazel eyes was. At first, I dismissed the idea as impossible. I didn’t think it could happen with my mom having blue eyes. But then I did some more research.

I learned that brown eyes are dominant over all, hazel and green are dominant over blue, and blue is completely recessive. This means that for Elisha to have hazel eyes, she would only need one hazel allele from my dad. My mom’s blue eyed allele that my mom had to of given Elisha wouldn’t have affected it (My mom’s eye color genotype MUST be bb, or blue and blue. This is because to have blue eyes you must be homozygous(have two of) recessive (blue eye alleles).)

That’s right. To have blue eyes you have to have 2 blue eyes alleles. That means, you guessed it, my dad needs to have a blue eyed allele! Otherwise, Elisha and I wouldn’t have blue eyes. The other allele my dad has would overpower my mom’s blue allele.

Now I knew that my mom’s genotype for eye color is bb (blue eye and blue eye) while my dad must have a b allele as well. There isn’t any way his genotype is bb, though, because he has hazel eyes! This means he MUST have a hazel allele! That means that my mom is bb and my dad is Gb (hazel and  blue). That results in a 50% chance of Elisha (or me, for that matter) having hazel or greenish eyes. TA DA!

Keep in mind I started learning about genetics this summer. I am also 13 years old. There is a high chance that I messed up/was misinformed in some degree/read the wrong answer on the internet/am just plain wrong and am making stuff up as I go unknowingly.

But, on the other hand I could be totally right!

This week I decided to stay in genetics again. I slacked a bit and only completed 3 out of 5 tasks, but I still feel accomplished. Here are my notes from this week!

“I watched a video about the structure of DNA. I’ve never taken chemistry classes so I was kind of completely lost. That’s basically it.

The second video was also about the structure of DNA and the different stuff that makes other stuff. I’m clueless. :(”

As you can see, I didn’t really understand anything, even though I tried really hard. I do believe that I learned a little bit, though.

“I don’t think I learned anything. Again. It was all the same sort of stuff as yesterday and I don’t know what the heck I just spent 20 minutes reading.

This was very interesting to me. I think it’s so cool how this dead virus can overtake the living virus and transform a rough strand into a smooth one!

In the video, I learned about Hershey and Chase, who proved Macleod, Avery and McCarthy’s theory that DNA is the stuff that holds all the information about organisms. They took some T2 Bacteriophage (This is a virus that kills bacteria I think). That did something… Not positive what. They knew that when the heat-killed smooth strand transformed the rough strand into more of the smooth strand, something was injected. They wanted to know if it was protein or DNA. Chase and Hershey though that protein would hold all of the information of the organism, while Macleod, McCarthy, and Avery thought it was DNA.

Man… I understand this in a broader way and it makes sense, but I don’t know how to write it and explain it! I don’t know what did what, just that something did something resulting in something that makes a lot of sense.

Anyway, something from that virus was mixed with/grown with radioactive 32P (phosphorous) and some with radioactive 35S (sulfur). They knew that if DNA was the answer then they would end (somehow) end up with 32P. If it was protein, they would end up with 35S. In the end, they ended up with/found/discovered 32P. That’s how we know DNA holds all of our genetic information!

The article I read was kind of re-explaining what the video said. I understand a bit more. A bacteriophage is a virus that attacks bacteria. The scientists grew this with the 32P and 35S. Here is some stuff to help understand it better (from the article).

“Hershey and Chase knew that the phages attached to the surface of a host bacterial cell and injected some substance (either DNA or protein) into the host. This substance gave “instructions” that caused the host bacterium to start making lots and lots of phages—in other words, it was the phage’s genetic material. Before the experiment, Hershey thought that the genetic material would prove to be protein

To establish whether the phage injected DNA or protein into host bacteria, Hershey and Chase prepared two different batches of phage. In each batch, the phage was produced in the presence of a specific radioactive element, which was incorporated into the macromolecules (DNA and protein) that made up the phage.
One sample was produced in the presence of 35S, a radioactive isotope of sulfur. Sulfur is found in many proteins and is absent from DNA, so only phage proteins were radioactively labeled by this treatment.
The other sample was produced in the presence of 32 P, a radioactive isotope of phosphorous. Phosphorous is found in DNA and not in proteins, so only phage DNA (and not phage proteins) was radioactively labeled by this treatment.
Each batch of phage was used to infect a different culture of bacteria. After infection had taken place, each culture was whirled in a blender, removing any remaining phage and phage parts from the outside of the bacterial cells. Finally, the cultures were centrifuged, or spun at high speeds, to separate the bacteria from the phage debris.”

This was also very interesting to me, however much confusing it was. I don’t fully understand the order of operations but I have an idea of how it works and I like that. Of course, I would rather fully understand it, but having an idea feels nice.

Something I also really like is how there was a woman scientist that helped make the breakthrough discovery about DNA carrying the genetic information versus protein. Everybody else that Khan has talked about (Gregor Mendel, Thomas Hunt Morgan, MacLeod, Avery, McCarthy, Griffith, Hershey) were men. But Martha Chase helped make the definite discovery of DNA.

OTHER NOTES: (keep in mind I’m telling myself I can’t use any outside source to remember things, so I might say I think a lot. I’m relying on my brain alone!)

I finally memorized what DNA stands for! DeoxyriboseNucleic Acid

RNA (something that has the recipe for different amino acids to put it simply) stands for Ribose Nucleic Acid.

Gregor Mendel was in the (I think) 1880s. He did experiments with pea plants and discovered heredity! He noted the ratios of differently colored pea plants. These ratios are spot on and used today!

Thomas Hunt Morgan started breeding fruit flies in 19-something. I know for sure the latest year was 1911.

Boveri and Sutton I think discovered/did something with chromosomes. I believe they came up with the theory that traits and genes sat on chromosomes.

Griffith came up with the Transformation Theory/Hypothesis/Idea. He wanted to come up with a cure for pneumonia but ended up discovering something different. He injected different viruses into mice and discovered that the dead smooth strand could transform live rough strand into smooth strand!

Avery, MacLeod, and McCarthy wanted to figure out why/how the transformation theory worked. They took the smooth strand and found that the virus has DNA! They believed that DNA was the thing that held genetic information.

Hershey and Chase wanted to know for sure if DNA or proteins held genetic information. Hershey was pretty sure it would be the proteins, but he was wrong! The two did a slightly complicated test with stuff and they proved that DNA actually holds the genetic information for organisms.

That’s all the time I have for today; every finished blogging ten minutes ago! Bye!

This week for my Wings sprint I focused on genetics. I had lots of ideas of how I could learn more, but the one most available to me and the most fun seems to be Khan Academy; at least so far. I learned a lot this week! Here is all that I learned from different lessons. The paragraphs in quotes are what I put in the description of the card until I figured I wanted to explain things in detail.

“I learned about sex-linkage, Thomas Hunt Morgan and his fruit flies, double cross-overs, and genetic mapping. I really enjoyed learning about Morgan and the fruit flies; it’s very interesting how the traits skipped generations and only showed up in the males. I think that would be a very interesting experiment to do myself! Maybe some other time I’ll do something like Mendel and his peas.”

Sex-Linkage: This was probably one of my favorite subjects. Bare with me: I need to explain quite a bit.

Thomas Hunt Morgan and his fruit flies: Thomas Hunt Morgan was an embryologist who had turned to research in heredity. In 1907 he began breeding the common fruit fly. He was hoping to discover large-scale mutations that would represent the emergence of new species. In 1910 he saw that one of the fruit flies had white eyes. He bred this mutant fly with a normal, red eyed female. The F1 generation were all normal. He then bred the F1 generation to produce F2 and one fourth of F2 had white eyes! One interesting thing about this is that only the males had white eyes; never the females. Here are some pictures to help explain it (from the Khan Academy article I learned about this from) 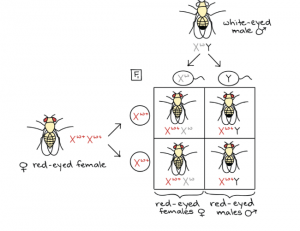 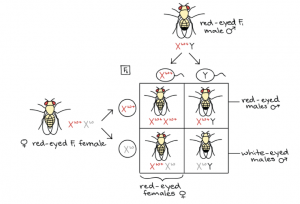