This Monday was MLK day. Every year pretty much everybody from school goes Uptown to the different museums offering free or cheap admission to either their usual exhibit or a special event. Last year I went to the Harvey Gannt Center and this year I went to the Levine Museum of the New South. I really like the Levine, but I’ve been so many times that it’s a little bit boring.

I really like how instead of not being able to touch anything, you can feel cotton in different stages and be in a barber shop or appliance store from the mid 1900s. In between the little shops and activities there is a lot of information mostly about segregation/desegregation, what working was like for poor Americans, and how Charlotte (and the area surrounding) has changed over the years.

Even though I’ve been so many times, I always notice little things I hadn’t before. Like the two black boys, aged 8 and 10, were put in jail for kissing a white girl their age. I also saw a picture of the redlining done. Redlining is where the government decides which kids go to which schools because of their race and/or socioeconomic status. Instead of drawing clean lines that make sense, they would move them all weird so that the kids of color all went to one school. Then, they would give way more money to the white schools than the other ones.

I didn’t learn this at the museum, but I did learn this recently. It’s kind of like (or maybe it is) redlining. The neighborhoods were numbered 1 2 3 and 4. 1 being the whitest and richest and 4 being the poorest and non-whitest. My dad looked it up and our neighborhood used to be a 4. It’s crazy to know how much the area has changed!

This week we had a crazy (crazy for where we are) snow so school was cancelled Wednesday and Thursday. On Wednesday Elisha and I went out and played a lot but yesterday it wasn’t as tempting. It had started to melt and we experienced it enough the day before. We started to make a snowman, but turned it into Dobby the house elf from Harry Potter. It looked really bad. Maybe I’ll add a picture later. Today there’s still quite a lot of snow in the spots where the sun hasn’t shone too much.

Balto (my dog) loves the snow most of the time. He likes to run full speed through it when it’s ankle deep but thinks that everything else is just boring and cold. He prefers to sleep in his bed by the fire.

I found this ancient picture of him. 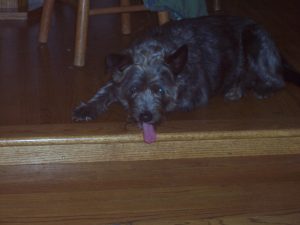 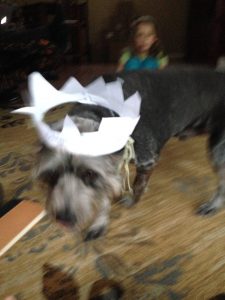