We were supposed to get to Nancy’s house at 8:00am, but I ended up getting there at approximately 8:21am. This was because my braces (Click HERE to see my “Braces!” post), or more specifically my archwire, was poking into my cheek. When I say poking into my cheek, I mean bent to a FISH-HOOK shape and fish-hooking my CHEEK.

Anyways, I had to go to the orthodontist at 7:30am to get it fixed. I woke up at 5:30 to make sure I had packed everything and left my house at 7am. I went to the orthodontist and they fixed my archwire. We then got to Nancy’s house about 21 minutes late. We (Elisha and I) were the last people there and immediately loaded our stuff up into our respectable cars. I road in Milky the van and Elisha rode in Melissa’s car (it doesn’t have a nickname unfortunately). Then we were on our way! 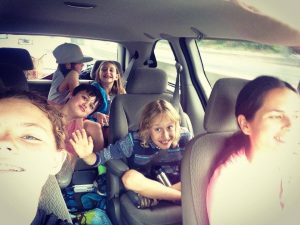 We had an interesting drive. Caleb was our entertainment. We learned that he was one of Nancy’s parakeets in his past life. He was also an ant.

We stopped at a gas station and had quite an interesting stop there. Will saw a big dagger that was completely dull and flat. He decided to call his mom and ask if he could buy it for $20, then bought it, While this was going on we were all waiting for him so that we could get back on the road. Tomis started backing up to leave when Nancy told him he was missing Will.

The drive was pretty loud and gave Andrew a bad headache and me a little headache that went away once we arrived to Nancy’s Mom’s house.

It was a pretty nice day until we got into Maryland. Then it was SO. RAINY. We were driving and it started raining so much that we could barely see out of the windshield! It started out of nowhere too. Then suddenly it stopped and it was all sunny again. If we looked back we saw a storm and if we looked ahead it was sunny. We played the quiet game soon after that. When I say “we” I mean everyone besides the noisy people.

Then we finally got to the house! Within 15 minutes of arriving we were eating amazing Vietnamese food! Hac (Nancy’s mom) was born and raised in Vietnam and escaped to America on a boat with Nancy’s 3(?) siblings. All of Nancy’s siblings are fully Vietnamese but she is half Vietnamese and half American.

The food, as I said, was amazing. Here are some pictures from dinner! 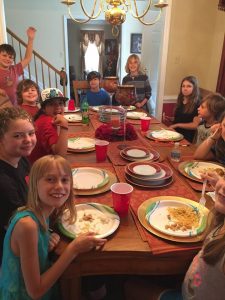 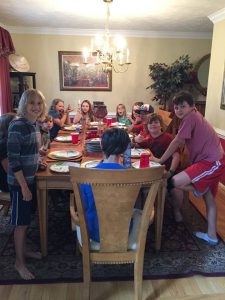 There was a noodle dish, fried rice, and EGGROLLS! Hac’s eggrolls are famous in the Mosaic community. They are AMAZING. I would eat them all day if I could!

After dinner a bunch of kids went to the park. The park is directly behind the house but there is as giant field in the way. It would be SO awesome if there was a zipline or something from the porch to the park.

You have to buy tickets for the permenant exhibit and they were sold out, so we went to some other places. First of all, since Andrew had never heard of the Holocaust until the night before, we started off in a place about the kids. You could also interact with it a bit more than any of the other places. The exhibit was specifically about one boy named Daniel. I think he was 11 or 12. I’m not sure. He kept a diary during the Holocaust. Daniel and his family were Jewish but his father was also a war veteran with a medal for bravery. He had a sister named Erika and a mother, but I can’t remember her name.

The exhibit was set up like you were there yourself. After you watched a video you went and looked around Daniel’s house. It was pretty realistic. You could hear the family having dinner, you could go into Daniel’s room and look in his drawers. Pages from his diary were put everywhere. I didn’t read all of them because it would have taken so long. This is before many changes happened in Germany and other places.

Then you walked through the streets and saw “Jews Only” or “No Jews or Dogs Allowed” signs everywhere. There was a jews only bench and shops that had the signs prohibiting them from entering. We saw Daniel’s father’s shop and the broken glass windows. There were pieces of fabric hanging off of hooks that looked like they had been ripped off and taken. There were also pictures of people wearing the patches with “Jew” or “Jude” written on them. There were pages of Daniel’s diary everywhere here too.

After walking through the streets we saw the family’s bags packed. Daniel’s family was being forced one of the ghettos. You could look inside Daniel’s little sister’s bag and see a dress and doll. Then we walked through a ghetto. The ghetto was for people who were Jewish but a bit too important to go straight to a concentration camp. Daniel’s father earned them that with the medal of bravery.

The family lived in a tiny house and were forced to work all day. I specifically remember that Erika worked with fabric because she would sneak little bits of it back home to sew together. Each week the family had one loaf of bread and cabbage and water soup per week. You could look at the cabbage and water soup. It looked absolutely barf worthy.

Before long his family was at a concentration camp. Erika and his mother were separated from Daniel and his father. They never saw each other again. Daniel worked all day every day. He had barely any food and people were dying all around him all the time. He shared a bunk with I believe 8 other men.

But Daniel and his father survived! At the end there was another video. Then you could write a letter about how you felt then put it in Daniel’s mailbox.

There was another exhibit that had some artifacts, videos, pictures, etc. There was also a part where you can write your feelings about a picture then email it to yourself (or in some of the kids’ cases, their parents). We saw a bunch of tiles painted by kids. Some had really amazing art on them! A lot of the pictures were about how or why we can never repeat the Holocaust. 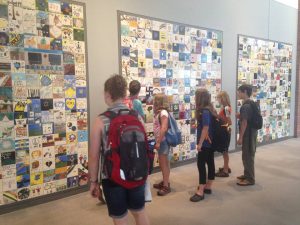 Then we went to join the other kids at a group of food trucks!

I got tamales and they were good and very spicy. I also got icecream, Tessa’s leftover pasta, Jackson’s leftover icecream, and the rest of his sprite as well. I ate a lot.

Afterwards we all walked to the Natural History Museum! This was fun, but I went to the exhibit I already had seen and nothing new. That was a bit disappointing. The exhibit I went to was the Mammals exhibit. There were a bunch of taxidermy-ed animals there. There were cheetahs, a porcupine, monkeys, apes, buffalo, even a koala! I really enjoyed the koala because of how strange its feet are. This is just a picture off of the internet, but you get the idea. 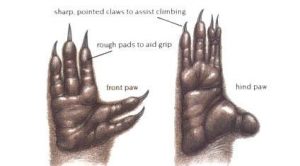 Overall, it was a really fun day in DC! 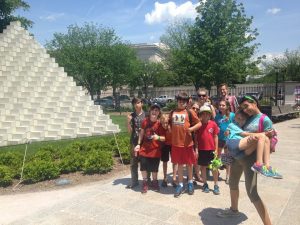 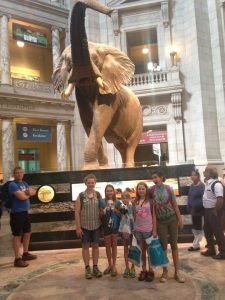 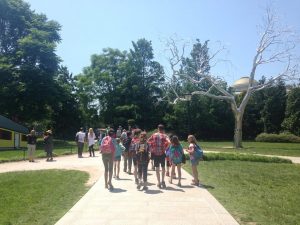 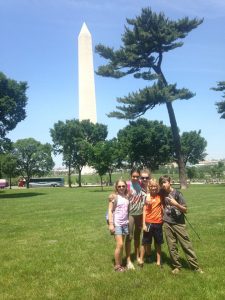 The next day we went to Annapolis and Eastport. First, we went to the Hammond-Harwood House. The house was so beautiful! The house was built right after the American Revolution. One of my favorite things was seeing the 18th century security system. They had around 5 different locks to prevent break-ins. Another super cool thing was all of the chairs. A lot of them were made by a famous carpenter named John Shaw. The backs were beautifully carved and were preserved so well because you used to never relax onto a chair back. You would sit up straight, thus preserving the impressive backs. 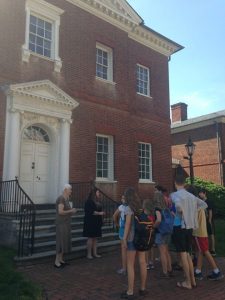 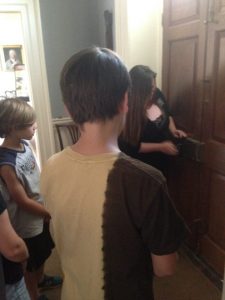 Another interesting thing is that the guest room would usually be the most (or close to) expensive and decorated room in the house. The was to impress guests, regardless if they were staying or not. If they weren’t then the room was used for tea or something of the sort. This room had such impressive furniture, crown moldings, and fabrics! Especially fabrics. 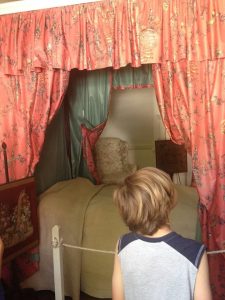 One big focus that house builders/owners had was the crown molding (the designs that connect the ceiling to the walls. In rooms that guests would be in the crown molding was amazing! Lots of layers and designs. For example: The entryway had impressive molding, but the guest room had crown molding 10 levels above the entryway! The dining room molding was also impressive and interesting to look at, but the bedrooms barely had any at all. This was because guests generally wouldn’t ever go into the home owners’ bedrooms or private area.

We also toured the slave quarters/kitchen. Since kitchens regularly burned down, or at least had fires, they were separated from the rest of the house. It was much easier to rebuild a small kitchen than to rebuild your whole entire house.

Another interesting thing was the spice cabinet. There was a cabinet that was always locked back in the 18th and 19th century. The mistress of the house carried the key with her, so whenever the slaves needed spices to cook with she would unlock the cabinet and get the spices for the slaves. This was because spices were so expensive. If a robber came into the house, it would be locked up. This was also to keep slaves out of using spices when they weren’t needed.

After the tour we did a few activities. We traced, designed, and colored our own chair. Then we made our own sashays. Sashays are pouches filled with lavender. People used to bathe every month, and sometimes even every two months. This meant that everybody stunk a lot. Women would have sashays tied around their neck or tied onto their wrist. That way if somebody smelled especially bad they could casually smell their wrist. 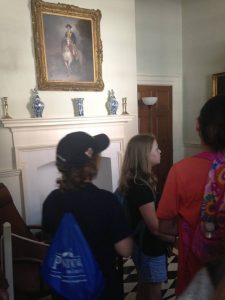 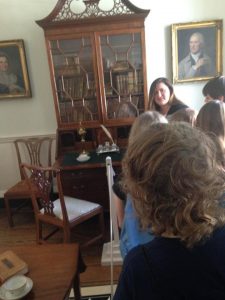 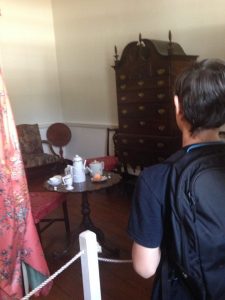 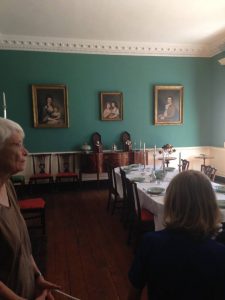 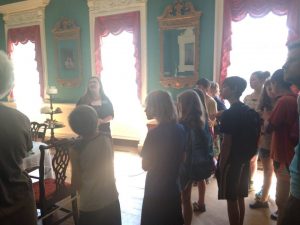 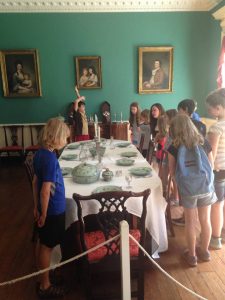 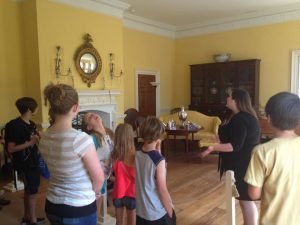 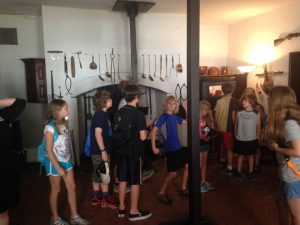 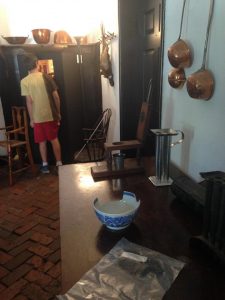 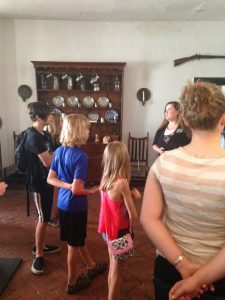 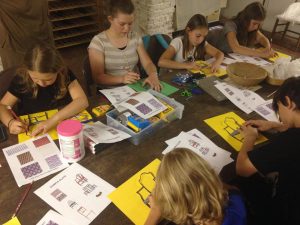 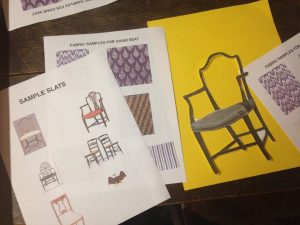 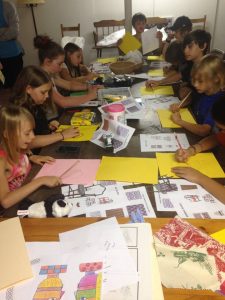 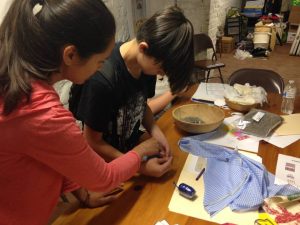 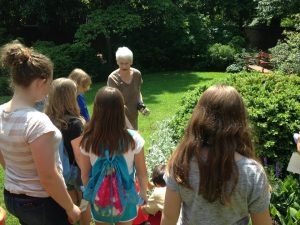 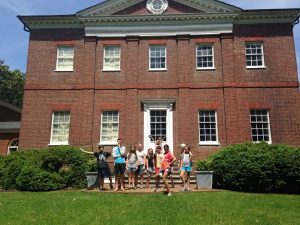 2 thoughts on “Washington D.C. and Annapolis”