This week (and last week) I did something called Friendship Trays. If you are older or sick and can’t get food yourself, then you can sign up for Friendship Trays. This means that every weekday people bring two meals to your door, ond cold and one hot meal, made specifically for what you eat. If you are gluten free, dairy free, etc. then you get a meal going along with that. Today we brought meals to three places. The first place was pretty awkward and different. The instructions were, if we were comfortable, walk on in and put the cold meal in the fridge and offer to heat the hot meal up in the microwave. @NancyT decided that @libby and I would be the two to go in this time. So we each went up to the door, each of us with a meal, and tried to walk in. The door was locked. Considering we were supposed to walk right in this was pretty strange. Then we knocked on the door. Nothing happened. We knocked a bit harder and after probably 45 seconds, I started walking back to the car. Then Liberty called me because someone was answering the door. But it wasn’t an old lady, like we thought, or anything close. This was probably a 15-18 year old girl. She said that she had just woken up and she would take the meals. The awkward thing was that she had no pants on, just underwear, and a shirt with holes. EVERYWHERE holes. Yep.

The next place was in an apartment complex. @animalfreak9 and @sassygirl26 brought this one, but they say that there was a really cute dog named Holly and that the lady was watching a gameshow.

The last place, we went to the wrong door. We rang the doorbell and waiting a few seconds. Then we heard whistling. We thought that the whistles were just birds but then I realized that it was a lady at another door. We didn’t read the intructions (which said to go to a different door) so that’s probably why. Overall it was super fun and I want to do it again next week. 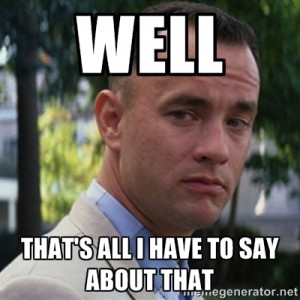